My W124 8v had the recurring issue of the dashboard indicator [bulb symbol] lighting up which indicates to the driver that one of the front or rear indicator lights may not be working.

However, I did not have any faulty bulbs or headlamps.

Upon enquiring with several workshops and owners, it could be due to a faulty lamp control module.

I have had the symptoms of the dashboard indicator randomly being lit without any activation of any signal lamps or headlights or brakes being applied. And the occurrence is happening more recently.
And past few days, it became an instant on within 30 seconds of starting the car during warm-up idling.

And the most recent workshop I visited, told me that this module lets the driver know if there is a faulty bulb somewhere by means of checking the resistance of each bulb electrical linkage.
And mentioned that if the module is faulty inside or if a wrong wattage bulb is used, the module will light up the dashboard indicator.

And I was also "advised" that if the exterior bulbs/lamps are all working correctly, the dashboard bulb warning indicator can be ignored as it is only a precaution warning light and will not impair the electrical system of the car.

The electrical engineer in me knew that the problem have to be sorted out before it causes any bigger issues. I borrowed a new piece from a fellow W124 owner [ Adrian Tan ] and proceeded to replace the module on my own.

The lamp control module seats behind the fusebox in the engine bay. A total of 8 screws needs to be removed via a cross screwdriver.

Though the lid shown in the picture above is easy to remove, it is the connector that seats to the pins of the module that was almost impossible to remove as there were little space to bring any tools in.

After much effort to unseat the module from its connectors, I pryed open the case that holds the actual circuit board in the module's black exterior case and gave it a whiff.

MY NOSE PICKED THE FAMILIAR SMELL OF ELECTRONIC BURN THAT I ENCOUNTERED A FEW YEARS AGO!

Upon closer inspection of the PCB of my old lamp control unit, it was seen that there were quite a fair bit of water stains on the top of the PCB. And looking around the engine bay area near to where this module is covered by the lid above the fusebox, there is a rubber lining along the firewall that serves as a protection against water coming down from the windscreen and guides the water along to both sides of the bonnet where a drain pipe allows water to flow down and out of the engine bay area. 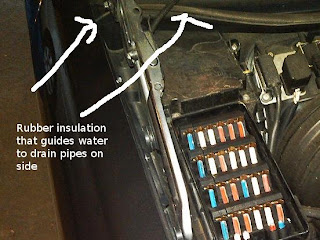 As the rubber ages , it will shrink and harden, causing the rubber guide to somewhat be shorter than the entire length intended, there will be a gap between the rubber and the drain pipe. I suspect excess water overflows the height of the metal that hold the rubber lining in place and might have leaked on the area where the lamp control module is seated. Though there is a cover in place, the moisture accumulated below might have affected the PCB.


I am glad I chose not to ignore it and very satisfied that at least with the 21 year old car, it had the warning indicator light to tell me that something was not right. [ unlike my previous car which was built close to two decades after the W124 ]


As a W124 owner to another, the W124's health is the owner's responsibility, not the workshop's responsibility. If a fire breaks out in the engine bay due to electrical faults, no workshop will take the liability just because of an advice that they gave.